Pancreatic cancer has a significantly poor prognosis; therefore, the development of effective treatments is an unmet clinical need. The major drawback in this field was the lack of useful model animals, which delayed the establishment of markers for early diagnosis and therapeutic options. The research group of Professor KAMIMURA Kenya (Department of General Medicine, Niigata University School of Medicine in the Division of Gastroenterology and Hepatology, Graduate School of Medical and Dental Sciences Niigata University), SHIBATA Osamu (graduate student) and Professor TERAI Shuji in the same division established an effective carcinogenesis method with wild-type rats by selectively introducing oncogenes into the pancreas, using the pancreas-targeted hydrodynamic gene delivery method1 that has been developed by the group. 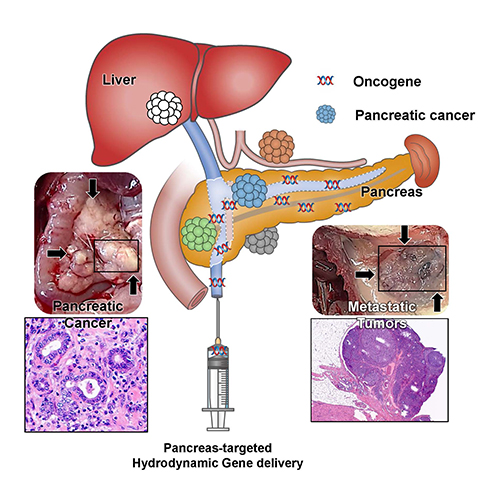 2. KRAS gene
A member of the ras family of oncogenes, which transmits cell proliferation signals to the cell nucleus and promotes cell proliferation. Mutations in this gene (e.g. KRASG12D) play an important role in promoting carcinogenesis.

3. YAP gene
The YAP (yes-associated protein) gene is one oncogene that functions in various human cancers. Involved in cell proliferation as a transcription factor, the YAP is also reported to be inhibited by the Hippo signaling pathway, which enables controlling organ size and suppressing tumors.