Astronomers have unveiled the first image of the supermassive black hole at the centre of our own Milky Way galaxy. This result provides overwhelming evidence that the object is indeed a black hole and yields valuable clues about the workings of such giants, which are thought to reside at the centre of most galaxies. The image was produced by a global research team called the Event Horizon Telescope (EHT) Collaboration, using observations from a worldwide network of radio telescopes.

The image is a long-anticipated look at the massive object that sits at the very centre of our galaxy. Scientists had previously seen stars orbiting around something invisible, compact, and very massive at the centre of the Milky Way. This strongly suggested that this object - known as Sagittarius A* (Sgr A*, pronounced "sadge-ay-star") - is a black hole, and the image shared on May 12, 2022 provides the first direct visual evidence of it.

Although we cannot see the black hole itself, because it is completely dark, glowing gas around it reveals a telltale signature: a dark central region (called a "shadow") surrounded by a bright ring-like structure. The new view captures light bent by the powerful gravity of the black hole, which is four million times more massive than our Sun.

"We were stunned by how well the size of the ring agreed with predictions from Einstein’s Theory of General Relativity," said EHT Project Scientist Geoffrey Bower from the Institute of Astronomy and Astrophysics, Academic Sinica, Taipei. "These unprecedented observations have greatly improved our understanding of what happens at the very centre of our galaxy, and offer new insights on how these giant black holes interact with their surroundings." The EHT team’s results were published on May 12, 2022, in a special issue of The Astrophysical Journal Letters.

Details of the Research

National Astronomical Observatory of Japan: Astronomers reveal first image of the black hole at the heart of our galaxy 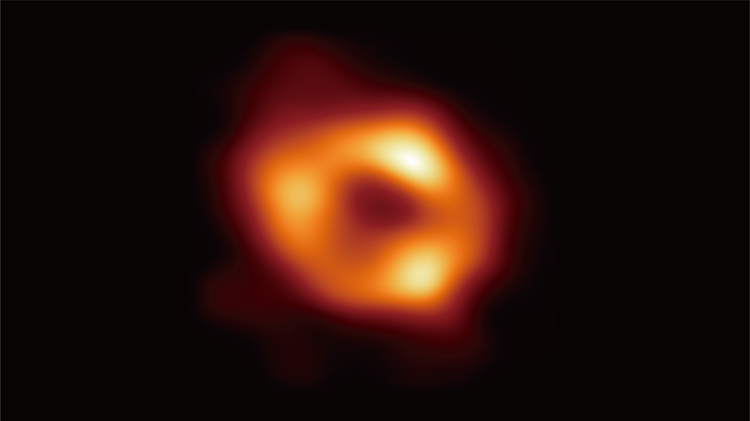 First image of the black hole at the centre of the Milky Way
Image credit: EHT Collaboration