Cutoff lows are cold-core cyclones existing in the upper troposphere developing from precursory preexisting troughs that is ultimately cutoff from the connections with the polar source region, as shown in Image 1. It is typically identified as local minima of geopotential height fields in the 500-200-hPa range. Most cutoff lows have synoptic spatial and temporal scales on the order of hundreds of kilometers and several days.

Several past studies have conducted study on cutoff low and proposed schemes using 1) variables based on geopotential height or relative/potential vorticity (PV), and 2) local extremum point or a closed contour around the extremum point.

Dr. Meiji Honda and his co-workers from Faculty of Science, Niigata University and other institutions have proposed an extremum point-searching scheme that can seamlessly detect the location of cutoff lows (with their intensity, size and background height gradient) and preexisting troughs in a consistent and integrated manner. The proposed scheme is applied to the 200-hPa geopotential height field at 1200 UTC 13 April 2015, when a cutoff low is over the Yellow Sea. Dr. Honda and his co-workers have described the basic concept of the proposed scheme using a longitudinal one-dimensional (1D) geopotential height profile and is expanded for two-dimensional (2D) height fields. The 2D average slope function AS is produced to extract S0, r0, and the location of depression bottoms by searching local maxima of AS+, as shown in horizontal distribution map, i.e., Image 2. The distribution maps for the detected cutoff lows and preexisting troughs are clearly illustrated along with their intensities, sizes, and local background flows estimated from snapshot height fields. The intensity and scale derived from the proposed scheme will allow for a better understanding of the cutoff low life cycle. 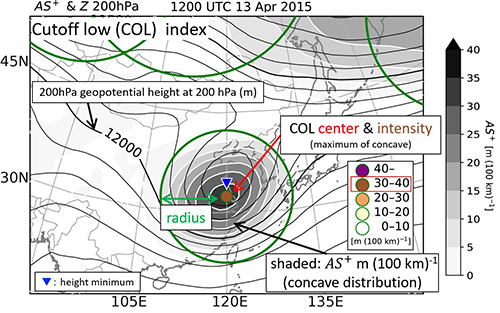 Image 2. Distribution details.
Horizontal distributions of the 200-hPa geopotential height Z (contours; m), AS+ [shading; m (100 km)-1] at 1200 UTC 13 April, which indicates fields of AS maxima with respect to r at all grid points. The blue triangles denote the location of local height minima. The COL index, COL center and intensity, concave distribution shown in image.

Dr. Honda summarizes the study as: “Upper tropospheric cyclones (cutoff lows) are frequently associated with hazardous phenomena, such as tornadoes. We propose a new index of cutoff lows (COL index) based on an automated numerical scheme, which extracts their locations, intensities, sizes from snapshot upper tropospheric weather map data.”

The contribution from Dr. Honda and his co-workers in the form of new proposed automated scheme has ability to seamlessly detect the cutoff low and its preexisting trough as an identical depression even by removing a local background height slope from a geopotential height field (quantifies the geometric features of a depression from its horizontal height profile). In addition to this, the proposed scheme also has the capability of early stage detection, a snapshot view, the requirement of a single input (geopotential height), and cyclone and anticyclone detection.

The proposed scheme is compared in detailed (highlighting both similarities and differences) with some of the most sophisticated tracking schemes (like Melbourne scheme, TRACK, and NEAT) and based on the overall output, it is found to be compatible and sufficient for detecting and classifying cutoff lows. Hence, this study can be considered as a good contributor for providing an effective new type of numerical scheme in the sector of meteorology, which can provide reliable output using limited raw data.

The article “Seamless Detection of Cutoff Lows and Preexisting Troughs” was published in Monthly Weather Review at DOI: 10.1175/MWR-D-20-0255.1